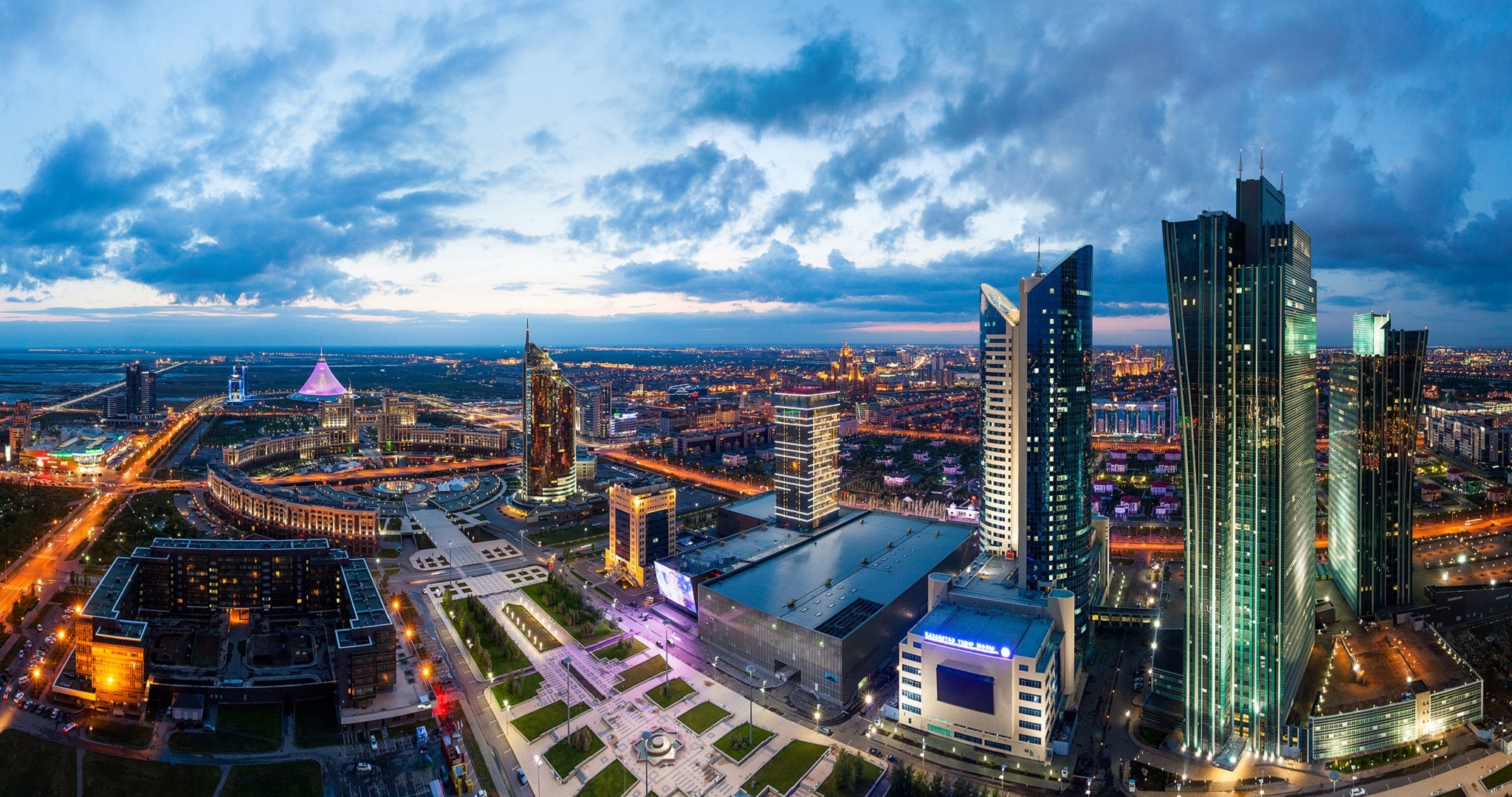 The Republic of Kazakhstan is a unitary state with a presidential form of government. According to the Constitution, the state proclaims itself a democratic, secular, legal and social state whose highest values are an individual, his life, rights and freedoms.


Kazakhstan gained independence on December 16, 1991. The capital is the city of Astana. The state language is Kazakh. The Russian language has the status of a language of interethnic communication. Monetary unit - tenge.


The President of the Republic of Kazakhstan is the head of state, its highest official, who determines the main directions of the domestic and foreign policy of the state and represents Kazakhstan within the country and in international relations. The President is the symbol and guarantor of the unity of the people and the state power, inviolability of the Constitution, rights and freedoms of an individual and citizen.


The Government implements the executive power of the Republic of Kazakhstan, heads the system of executive bodies and exercises supervision of their activity.


By its administrative-territorial structure the country is divided into 14 regions and 3 cities of republican significance:


The population of Kazakhstan as of February 1, 2017 was 17 million 945 thousand 300 people. According to the national census the ethnic structure of the Kazakhstan society by 2009 looks as follows:

The Republic of Kazakhstan is an industrial country with mining operations being one of the main sources of its economic growth. The country's mineral raw material base consists of more than 5 000 deposits which expected value is estimated at tens of trillion US dollars. The country holds first place in the world with regard to explored reserves of zinc, tungsten and barite, second - silver, lead and chromites, third - copper and fluorite, fourth - molybdenum, sixth - gold.
Kazakhstan also has considerable reserves of oil and gas, which are concentrated in its western areas. Nowadays the country belongs to the group of the world's leading oil-producing states with volumes amounting to more than 80 million tons of oil and gas condensate a year. According to plans the annual extraction will be increased to 120 million tons by 2020. At present Kazakhstan is in 9th place in the world with regard to confirmed reserves of oil. Besides that, the country is in 8th place by the reserves of coal and 2nd place by the reserves of uranium.


Traditionally great attention in the country is paid to development of the agricultural sector. Kazakhstan is among world's top ten grain exporters and is one of the leaders in flour export. Farming is well-developed in the north - 70% of arable lands are used for growing grain and technical crops - wheat, barley, millet. In the south of the country rice, cotton and tobacco are grown. Kazakhstan is also known for its gardens, vineyards and gourd plantations. Animal husbandry is the leading branch of the agriculture. The key areas of the animal husbandry are sheep breeding, horse breeding, camel breeding, cattle breeding and pig breeding. Poultry farming and fishery are also developed in the country. In a short historical term - from the moment of gaining independence in 1991 GDP per capita has increased by 16 times - from 700 to 12 000 US dollars, which is a phenomenal result even in comparison with swiftly developing southeast countries – so-called "tigers". According to British experts' estimations, Kazakhstan is in third place after China and Qatar among 25 countries with most dynamic economies of the XXI century's first decade. The country is in upper middle income group of countries as per World bank's classification. Over the years of independence Kazakhstan attracted 200 billion US dollars of foreign investments that makes up about 70% of the total amount of all investments attracted to the Central Asia. The country's international reserves as of the end of 2016 made up 90,8 billion US dollars, of them more than 61 billion US dollars are related to the National fund.


Kazakhstan's foreign trade turnover in 2016 made up more than 552 billion dollars. The main export goods are produced in the mining, fuel and energy, metallurgical, chemical and grain industries. The country's main trading partners are Russia, China, European countries and the CIS.


Aimed at the economy's diversification the State program of forced industrial and innovative development is successfully implemented in the country. According to this strategic initiative old enterprises are being modernised and new enterprises and manufactures are opened nationwide.


Kazakhstan is implementing a large scale project “New Silk Way" which aims to revive the country's historical role as a connecting link in the continent and transform it into a largest business and transit hub of the region, a bridge between Europe and Asia. As a result of implementation of this mega-project by 2020 the volume of cargo traffic passing through the country should increase by nearly 2 times and subsequently make up at least 50 million tons a year.
Kazakhstan's touristic cluster also has a significant potential that is capable to convert large landscape riches and the unique cultural-historical heritage of the country into new opportunities for development.


Within large scale social modernisation of the country new schools, professional colleges and universities are being constructed, up-to-date medical clinics and hospitals are put into service and the system of social support of the population is being improved.


Kazakhstan is a country with a unique culture and a rich past. It is a direct historical successor of state formations established by nomads of the Great steppe. Accordingly, Kazakhstan is consistently implementing the main geopolitical mission - assistance in integration and formation of a common space of peace and creativeness in Eurasia. Currently representatives of 130 ethnic groups live in the country. A consultative-advisory body on harmonisation of interethnic relations - the Assembly of the people of Kazakhstan is successfully functioning. In 2015 the V Congress of Leaders of World and Traditional Religions took place in Astana and was attended by 80 delegations from 42 countries of the world. Annually since 2008 leading economists, analysts and experts from all over the globe are gathered at the Astana Economic Forum. In the beginning of 2011 VII Winter Asian Games were successfully conducted in Astana and Almaty, while the national team took first place in team rankings. In January-February 2017, the city of Almaty hosted the 28th World Winter Universiade.


As a leader in the Central Asia, the country makes a considerable contribution to strengthening of the region's stability. The country has achieved big successes on the international scene. The evidence of this is Kazakhstan's OSCE chairmanship and conduct of this authoritative international organization's Summit in December, 2010 in Astana. One of the country's significant initiatives is the launch and development of the Conference on Interaction and Confidence-Building Measures in Asia – the Asian analogue of the OSCE. Kazakhstan's creative activity during its chairmanship in the Organization of Islamic Cooperation – the leading organisation of the Islamic world – has generated a positive feedback.


The country is also a recognized leader in the global antinuclear movement. As a whole, nowadays Kazakhstan actively co-operates with various countries-partners within the framework of a variety of international organizations, such as CIS, SOC, EAEU and etc.


In July, 2010 the Customs Union of Belarus, Kazakhstan and Russia was launched and since January 1, 2012 the Common Economic Space between these countries has started functioning. On January 1, 2015, a treaty on the Eurasian Economic Union entered into force. These unions are aimed at effective development of the states-participants' economy and increase of the population's living standard on the basis of a principle of free movement of goods, services, as well as financial and human capital through the borders of three countries.


The stable growth of all branches of the economy, the international recognition, the political stability serve as a basis for prosperity of the Kazakhstan's society. Kazakhstan is a country that aspires to the future, honors its cultural traditions and successfully realizes the huge creative potential in the modern highly-competitive world.